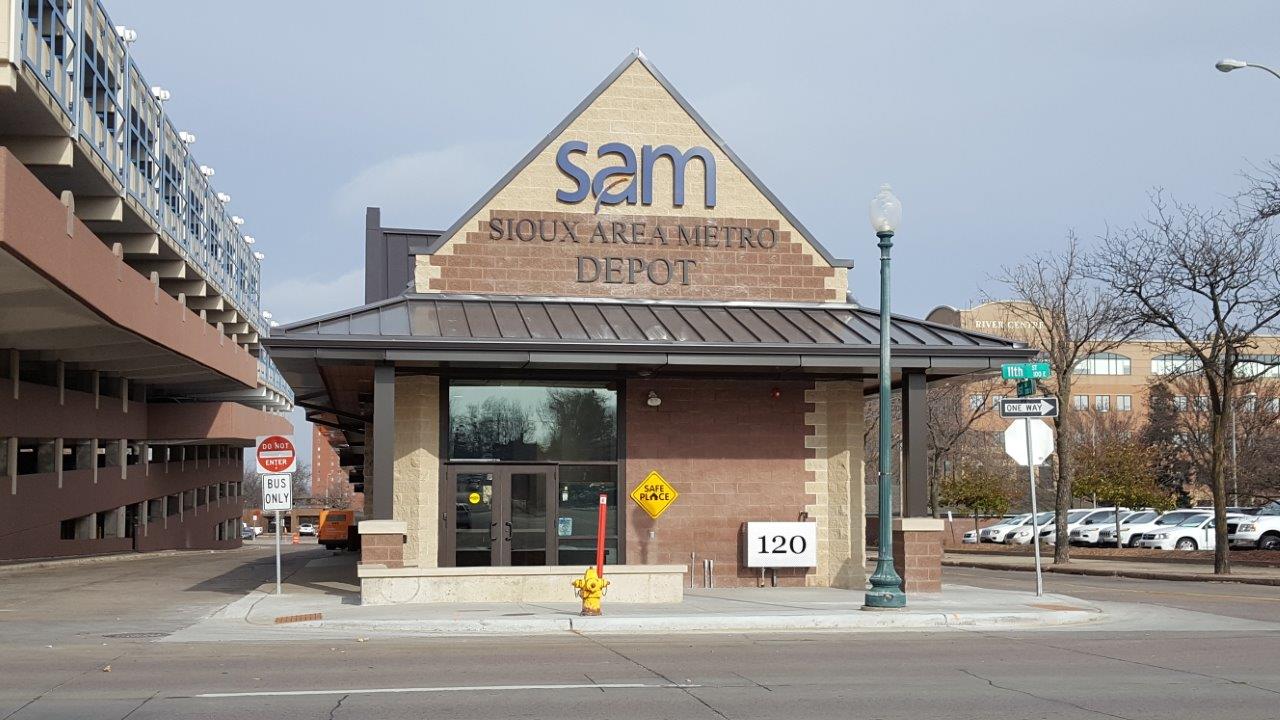 In partnership with Pantonium, a new on-demand transit (ODT) service was launched on December 19, 2020 by Sioux Area Metro (SAM) to operate on Saturdays for the residents of Sioux Falls, South Dakota.

The three-month pilot will be the largest of its kind in North America employing full-sized buses and will service 326 stops over 75 sq. miles of service area coverage.  On-demand buses will replace SAM’s fixed-route, all-day Saturday service, which previously operated eight fixed routes from 7:45 am to 6:45 pm.  The ODT trial is expected to only use four to six full-sized buses, as opposed to the eight buses that currently service all bus stops on Saturdays.

The trial is also projected to generate improved hourly ridership numbers, even under pandemic conditions, resulting in enhanced economic viability of the Saturday service. SAM’s weekday service employs 10 fixed routes to cover a total of 380 stops. The success of the Saturday service trial offers SAM the potential to explore expanding ODT services to weekdays.

Sioux Falls has a population of over 190,000 people and is the largest city in the state of South Dakota. The “SAM on-demand” project has been in the works for some time.  The city’s Innovation and Technology Department has spent over seven months studying the city’s bus system with the goal of making public transit both more efficient and useful for the city and its citizens.

Innovation and Technology Director, Jason Reisdorfer, recognized that moving to an on-demand system was unlikely to entirely replace fixed routes. Rather, it would eliminate the low-performing routes and allow for the implementation of a hybrid system, in which the busiest, fixed routes co-exist with on-demand routes to improve the overall performance of the city’s bus transit service.

Sioux Falls City Councilor, Alex Jensen enthusiastically referenced the SAM on-demand project telling Dakota News Now “A lot of people have worked a long time on this project, and with using the algorithms, and the technology that we’re going to be using, this is going to change the way that we provide bus transit in Sioux Falls and that will be to the benefit of the people here.”

With ODT, Sioux Falls is Prepared for New Challenges

The new ODT service is powered by Pantonium’s EverRun software which autonomously routes buses in real-time to optimize for productivity and resource efficiencies. In contrast to traditional demand-response or Microtransit services, Pantonium’s Macrotransit ODT solution helps operators do “more with less” by maximizing the efficiency of their current resources while delivering a more convenient and accessible experience for transit passengers. Doing “more with less” will become even more relevant for transit authorities as cities’ public transport infrastructures struggle to recover from the effect of the pandemic.

The move to more distributed workforces, which existed before the pandemic, has been accelerated by COVID-19. We are unlikely to experience the return to traditional commuting densities in a post-COVID world, putting even more pressure on public transit authorities to implement solutions that drive enhanced productivity and efficiency outcomes through their existing fleet of full-sized buses, while providing the same level of service, access and convenience for all citizens. Public transit authorities will likely be operating with diminished budgets, in which hourly ridership performance matters to generate fare-box funding support from government agencies. Only well-performing routes will qualify for increased public funding.

Through this partnership, Sioux Falls will offer an on-demand transit service allowing citizens to book bus trips from an app, online portal, or by calling the transit authority dispatch and choosing where and when they travel. Boarding a bus without booking in advance is possible too; drivers simply input the passenger’s trip and take them to their destination. Passengers will be able to travel to and from any two transit stops in the city without the need for transfers. By making bus service more accessible and convenient, this on-demand service will improve mobility for citizens to travel to their jobs and activities on Saturdays. 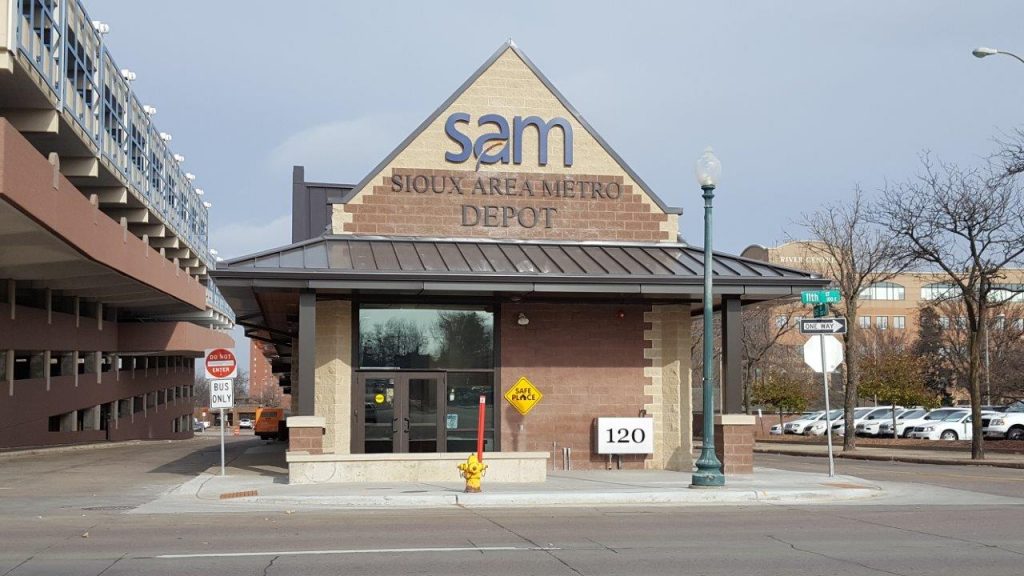 City of Sioux Falls Senior Planner, Sam Trebilcock, emphasized the importance of ODT to deliver an enhanced customer experience by eliminating transfers that are currently the bane of their fixed-route system. Trebilcock illustrated how the inconveniences of the current fixed-route system will be eliminated by the new ODT deployment.

“For instance, if you’re riding from Lincoln High School and you’re going to the Empire Mall, the way you have to do it now, is you have to ride to the downtown depot on route five.  And then you transfer at the downtown depot and take route three to the Empire Mall.  With this system you don’t have to transfer. You say I want to go from the bus stop at Lincoln High School to the bus stop at the Empire Mall. It is kind of a hybrid system.” Trebilcock added. “You’re still going from those bus stop signs to another bus stop sign. So, you have to walk some.  But you don’t have those transfers, and you can schedule the ride when you want it.”

Pantonium currently provides Stratford, Ontario a similar ODT service that operates on Sundays. The service has allowed the transit authority to cover their entire city with just two buses. The city’s 285 bus stops used to be covered by 8 buses on fixed routes.  The Pantonium ODT service has avoided passengers traveling to 80% of the city’s bus stops, which were unused on Sundays, while still delivering an 87% on-time performance with an average commuting time of just 16 minutes. The old fixed-route system required transferring at the central bus depot. For passengers traveling east to west in the city, travel times could exceed 60 mins on the weekends due to transfers.

Stratford’s ODT Sunday bus service has “been an overwhelming success…” delivering a new service based on the results of rider surveys. In response to declining revenues, Mike Mousley, Stratford’s Manager of Transit has announced he will expand ODT services to Saturday in order to reduce the overall service hours without sacrificing the passenger experience. This decision is expected to save $90,000 in operating costs without the need to change infrastructure.

Pantonium’s ODT Macrotranist service “puts transit back into the hands of our citizens. It’s transit based on when you want to go. It’s on your schedule. It’s not on the transit schedule…You’re more in control of planning transit than transit planning you. You’re totally in control of how you use the service” explained Mike Mousley. “Making transit easy to use with new, seamless technologies like this is one of the things that will bring people back to public transit.”

Pantonium intends to duplicate this success and bring positive passenger experiences for both the city of Sioux Falls and its citizens.

To Compete on Quality of Life, Cities Must Innovate

The pandemic has had a devastating effect on public transit with dramatically reduced ridership numbers and service levels that have forced many people back into their cars, cut those without cars out of the system and challenged transit authorities to service increasingly expanded service areas as urbanization continues to result in suburban and rural sprawl. The SAM trial is a particularly important and timely milestone for ODT services in the US, since it represents a deployment at scale, during these deeply challenging times, by putting all-day city bus transit services on-demand while replacing fixed routes. The result is a service punctuated by: full size buses; one service area; no transfers; and being passenger-focused.

(1) equal and convenient access for all to ensure that no one is cut out of the system and everyone is provided with the opportunity to lead productive lives. This drives important social equity and inclusion outcomes;

(2) The flexibility of large buses allows them to move large numbers of people over large distances because they are not tied to tracks. Thus, buses can cover large service areas while adjusting, in real-time, to changes in demand and density which delivers significant operating efficiencies (less vehicles, fuel, maintenance, carbon emissions, etc.) which translates into powerful environmental benefits; and

(3) ODT puts “people in seats” because there are no empty stops, which ensures that bus routes are productive and economically viable.

Cities are competitive entities. They compete on quality of life. Quality of life is all about the quality of city infrastructure and services, of which transport is the connective tissue. Pantonium’s objective is to help cities, like Stratford and Sioux Falls, to be more sustainable and more competitive while providing all their citizens with a superior passenger experience with no added infrastructure changes, costs or resources. By using Pantonium’s technology to deploy on-demand transit, cities are telling their citizens that the new service is “transit that yours.”