Prior to the fall of 2018, Belleville Transit offered evening service by running two buses on a single fixed route that circled the entire city. The routes ran from 9:00 PM to 12:30 AM and were mainly intended to serve workers commuting to and from work in the city’s North East Industrial Park.

But bus frequencies were low and the coverage area was minimal, it wasn’t a very convenient service and didn’t draw significant ridership.

In a conversation with Pantonium, Paul Buck, Belleville’s Manager of Transit Operations, revealed that the service was “only carrying about 35 or 40 passengers a night, and it just wasn’t sustainable…it wasn’t working efficiently”.

By replacing the fixed routes with on-demand service, Belleville had mostly hoped to be able to get their riders home a little bit quicker and stop wastage. They didn’t anticipate just how successful the service would be.

The new on-demand service, which covered 100% of the city’s bus stops, delivered immediate results to Belleville.

“We saw a 250 rider increase in two weeks,” said Buck. “until it maxed out at about a 300% increase in ridership very very quickly and caught us completely by surprise”.

The transit agency chalks up the immediate success of the project to how convenient and accessible the new on-demand service was.

“The service is customer-controlled, it’s very easy for a customer to use, and we put the power in their hands in order to book the ride and book the time and get to where they want to go,” Buck said. “It’s just incredibly convenient over regular fixed routing.”

Beyond increasing productivity for the transit agency, the service also made compelling social and economic impacts for city residents.

The findings of a recent survey of riders conducted by the University of Toronto indicated that most sampled riders were young, low-income earners, who lacked other transportation options. More than 70% of respondents believed on-demand transit made night travel more convenient.

The new service also had a tremendous impact on the local economy, with 72% of respondents indicating they rely on the service to travel to their jobs.

According to Belleville’s Manager of Economic & Strategic Initiatives, Karen Poste, access to labour was one of the biggest challenges for local employers.

“Once they’re able to find employees to work in their facilities, the challenge is getting them to come to all shifts. Most of our employers work a 24/7 schedule, and it has been a challenge for them to get staff to their facilities after normal working hours,” said Poste.

She says companies tell her regularly that the introduction of on-demand service has allowed them to completely fill their shifts.

“The on-demand transit service has almost completely eliminated absenteeism, the late times employers have been dealing with because people are able to get to work on time,” she said. 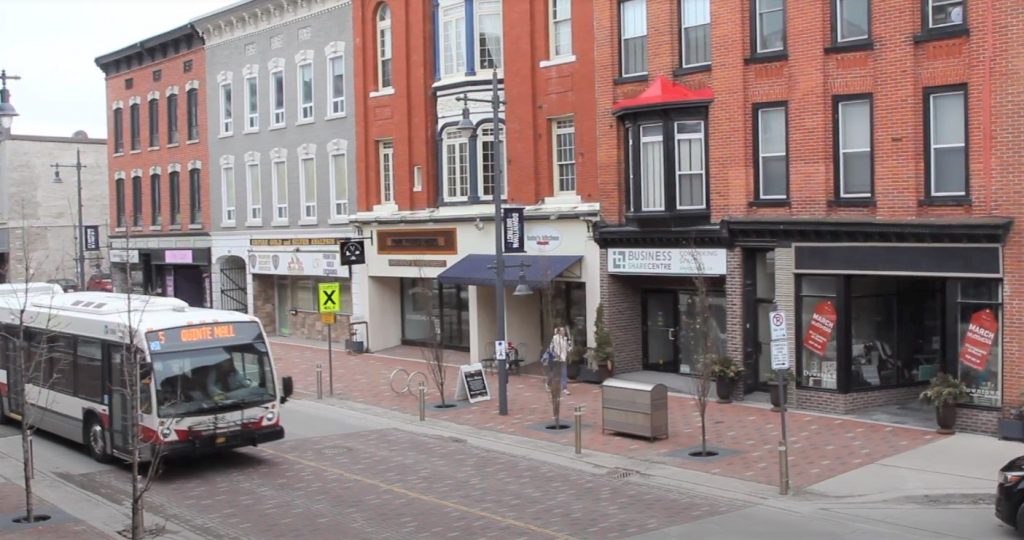 Like other cities across the world, Belleville too saw its ridership completely evaporate in late March following the spread of COVID-19. Paul Buck recounted that without fare income, he knew transit service would have to be reduced.

However, to continue accommodating essential trips and workers, they determined that adequate service would still need to be offered from 5:00 AM to midnight.

“So we started looking at our options. Do we run hourly service?” Buck said. “How can we set this up to make the most amount of sense with what we had”.

Belleville determined the best way forward was to discontinue all the fixed routes and switch over to full-day on-demand service. “It just made perfect sense,” he said.

Outreach was done to let the community and local employers know of the coming changes and drivers were evenly scheduled so not a single one had to be laid off.

With the apps, web portal, and customer service phone line already in place for riders to book rides, the on-demand service was running to cover the entire city within three days.

Initially, Belleville saw steady ridership at 200-250 riders per day, but as awareness of the service increased so too did the numbers of riders, especially for workers headed to the city’s industrial park.

With the flexibility of on-demand, Belleville scaled their service as rider demand changed.

“We adjusted, and we could do that on the fly, almost instantaneously,” Buck noted. “All you have to do is put another bus in the service”.

While continuing to deliver essential transportation, the city did so far more productively than if they had continued to operate their fixed routes. Their fixed route service required running a total of twenty-seven buses a day, with thirteen at peak times.

After switching completely to on-demand service Buck stated they were “down to 11 buses a day with six at the peak…a 58% decrease,”. Weekly mileage also saw a “60% decrease,” said Buck, while still offering service from 5:00 AM to midnight and “covering the entire city, every bus stop”.

Even in the thick of the pandemic shutdown, Belleville Transit was game-planning for an eventual return of fixed routes where and when they made sense.

“What we have looked at, now that we’ve had the opportunity to operate on-demand on a full day, is how easy the transition could be when we go back to regular service,” Buck said.

As the service operated through April and May, Pantonium’s on-demand system collected a large volume of trip data that illustrated city-wide travel patterns. This helped determine which specific areas saw high demand and at what times it was happening.

“We know when those key times are now, we can start looking at running earlier morning service on-demand until ridership builds up to the point where we have to go to our fixed routing” Buck noted.

Belleville reinstated fixed routes for day time service on June 1st and continued operating on-demand service for evenings and weekends. As the pandemic shutdown continued to lift and riders returned to transit, more fixed route service was added where it made operational sense.

For example, a bus stop at a commercial destination regularly saw high rider demand near the end of the on-demand service hours, which sometimes could be hard to accommodate. With the high demand, overlapping this area with fixed route service made sense and gave riders a second option to use a bus service.

By June 20th, fixed routes were operating daytime seven days a week, while on-demand was used strictly for evening service.

Put simply, Grains ensure riders can’t use on-demand buses to travel between two stops serviced by a fixed route, protecting the efficiency of the fixed route (view the video below to see Grains in action).

Compared to other transit agencies, Belleville had an easier time maneuvering through the challenges of the pandemic because their system was ready to handle the shock. Having on-demand transit already in place gave the agency the flexibility to easily adapt their service levels and efficiently handle changing demand.

With a resilient transit operation that’s proven its versatility, Belleville is positioned to continue to deliver pragmatic transportation to its residents both now and into the future.