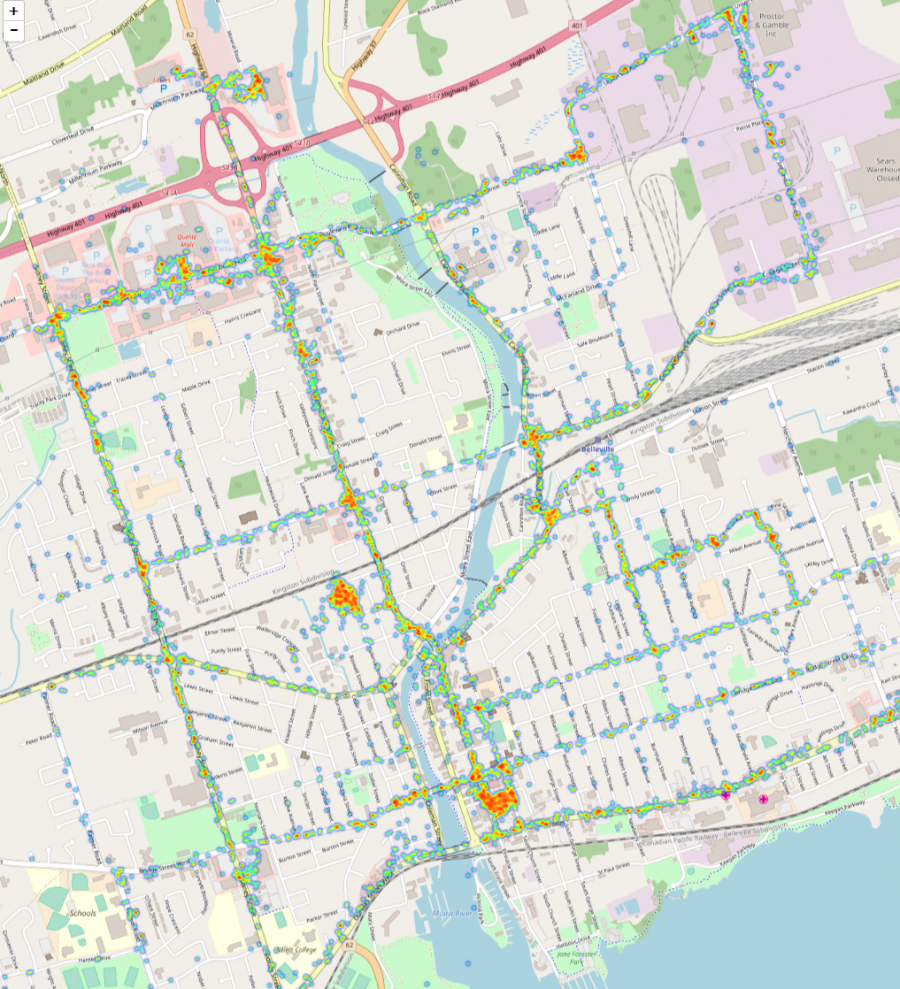 Public transit around North America is in decline and transit agencies are scratching their heads at what to do to turn this trend around. Public transit is an essential service in modern communities and is necessary to allow people to go about their daily lives including to get to and from, work, socialize and run errands.  To make fixed route public transit affordable, especially in rural and suburban jurisdictions, has often meant long rides and wait times to ensure access to everyone. The need to increase ridership, the main way to get more funding, becomes challenging for agencies to balance covering their entire service area with their current resources. Belleville, Ontario is trying a new approach to public transit. In September 2018, they started operating a new service, in partnership with Toronto based technology company, Pantonium. The service was designed to let riders order buses, on-demand, to take them to and from any bus stop.

The pilot project’s first week got off to a promising start, making news across Canada. The basic premise is simple, a bus driving along fixed routes is not always the best option. Fixed routes at night time or in low-density areas are usually expensive, unproductive and offer poor service to riders. It has been attempted to provide on-demand transit many times before, however no previous transit has used Pantonium as their provider of an artificially intelligent routing system.

The routing system developed for this pilot is unique due to the requirements for Belleville’s night bus service. The system had to run without human supervision because every night Belleville’s dispatchers go home before the buses hit the road. Rather than assisting dispatchers to build and change plans the technology works autonomously, with the help of connected mobile applications that allow the software to communicate with riders and drivers in real-time. Once it can monitor the locations of vehicles and demand, whenever something changes that could impact the plan the system logs it as an “event” which triggers several thousand iterations of planning.

These planning sessions are attempts to locate a globally optimal solution for all transit vehicles and trips in Belleville. Doing this is one most complex problems in mathematics, titled the “vehicle routing problem.”  Which is notorious for its difficulty as the necessary number of calculations increases at a factorial rate. For example, solving a day of travel for moving only 10 people to 10 different stops, has millions of different options. At 20 stops the options go into the trillions. On an average night the system will run itself a new planning session hundreds of times and can complete each session in about two seconds. The result is that every bus stop in Belleville is now accessible in less than 30 minutes, but the bus will only travel to one if riders are planning to be there.

Here are some statistics on the Belleville pilot project in its first month:

2) Per vehicle mileage has decreased by 30%

3) The number of bus stops covered by the service is 70% greater than the previous bus service, using the same number of vehicles and service hours

Overall analysis of a month of collecting vehicle data has shown that the previous fixed bus route is very different from where riders have wanted to go. This can be seen in Map 1 and Map 2 below. 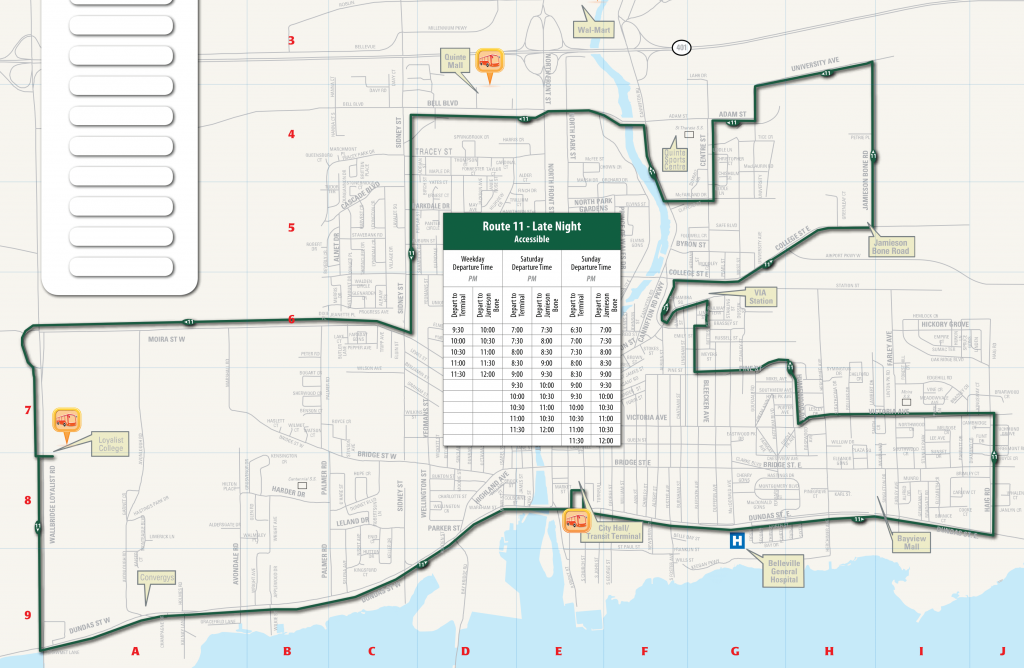 Map 2: Red is where Riders Have Actually Wanted to Go: 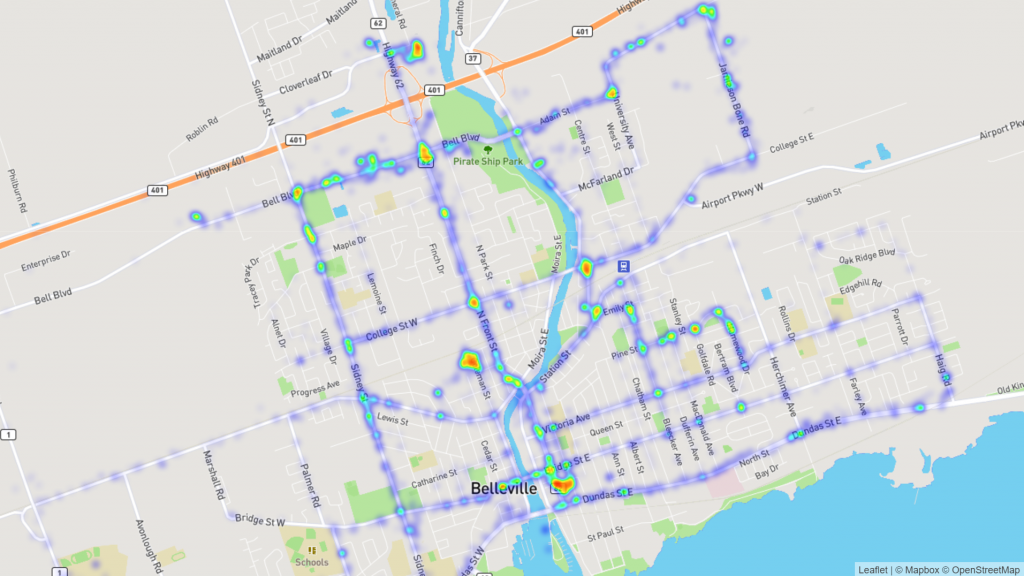 One of the most critical differences between the two maps is that Map 2 shows a concentration of rides in a central area, that was not previously serviced in Map 1.

The pilot will run until early 2019, when Belleville will decide to continue or expand the service. So far, the biggest challenge facing Belleville Transit has been the extent of the increase in demand for its services. Buses that used to carry only a few passengers per night are now being filled. The latest news from the City Council Transit Committee is that more vehicles are needed to cope with the increased demand.

Doing real world pilots is a great way to prove to the world that on-demand bus service is not just an idea, it is a real option available to public transit agencies to overcome challenges of traditional fixed route public transit systems.

Since starting in September 2018, the pilot project has also shown:

When and where on-demand public transit service will be most useful: It is not just low density areas that work for this service type, Belleville has a density of roughly 500 people per square mile.

The importance of having flexibility in service to handle riders requesting trips: Not everyone owns a smartphone, not everyone wants to call a dispatcher, not everyone knows about the pilot or service changes. You need to take riders on an ad hoc basis, from any stop, and allow drivers to input these ad hoc riders into the system.

That automation is critical for both routing and on-boarding in an on-demand model: Automation enables cheaper service scaling; rather than hiring more and more dispatchers the system only needs more computational power to grow.

Read more about the lessons here.